Overview of the Education Program 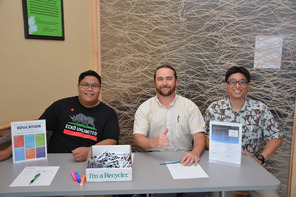 The Education Program provides a career ladder for those seeking employment in the field of education to address a critical shortage of teachers in Hawai`i, especially in underserved areas.  The Associate in Arts in Teaching (AAT) degree offers two options for students: As a terminal AAT degree, the program of study prepares highly qualified para-educators ready for employment, or as a transfer AAT degree to a baccalaureate program at a four-year College of Education where candidates prepare to become licensed in-service educators at the K-12 level. The 62-credit degree program is comprised of 19 credits of core and elective education courses and 43 credits of general education courses. Students pursing an AAT degree are expected to spend a minimum of 45 hours working in local schools, and develop a teaching portfolio by the end of the program. Housed in the newly constructed Education Building on the Leeward Community College Campus, the Education Program faculty and staff offer a wide range of academic, social, and financial support and resources in order for students to successfully reach their educational goals.

Starting in 2013, Leeward Community College is prepared to once again address a critical need in the State of Hawai`i by providing an Alternative Certification Program for Career and Technical Educators who seek licensure for employment in the Hawai`i Department of Education (HIDOE). Presently, no public or private college in the State is providing an alternative licensure pathway for Career and Technical (CTE) teachers who are employed or wish to be employed by the HIDOE. In response to the request by the HIDOE, an accelerated program has been created by Leeward Community College that will accommodate the work schedule of full-time employees and allow candidates to complete the requirements for Alternative Teacher Certification in the shortest time possible.

History of the Education Program 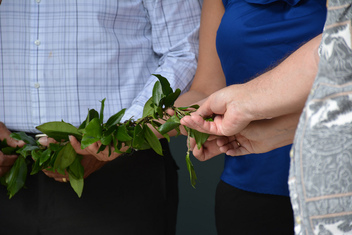 (Source: Ka `Imi `Ike Publication)
The Education Program, then known as the Associate in Arts in Teaching (AAT) Degree Program, began as a response to the difficulty that public schools in the Leeward and Central service area have experienced with the recruitment and retention of teachers in underserved areas and with the need for paraeducators to become highly qualified under the No Child Left Behind (NCLB) requirements. In 2002, then Leeward Chancellor Mark Silliman, often visited local schools to ask principals their needs and wants for educating Hawai‘i’s children. Principals responded that the high turnover of teachers in their schools and the need to have highly qualified paraeducators were their most pressing challenges Searching for an appropriate avenue for Leeward Community College to address these concerns, Chancellor Silliman fortuitously came across an AAT degree that was being developed and implemented by community colleges in Maryland. This new and unique concept of developing pre-service teachers during their first two years of college through an AA degree in teaching was a radical change from the traditional pathway where education majors normally start their teaching preparation during their last two years of college. Here, the idea is that community colleges are nationally recognized to provide the access and affordability to a large population of new students whose progress toward teacher certification can be expedited through the establishment of programs such as the Associate in Arts in Teaching. Recognizing the high learning curve involved in developing effective new teachers and the issue of teacher turnover, the AAT degree is designed to provide an avenue for two extra years of teaching preparation.  In addition, the AAT degree provides paraeducators with the minimum education credits needed to be considered highly qualified under the NCLB act, and provides the option of transferring to a four-year university if a teaching credential is sought.

After several years of discussions and debate, Chancellor Silliman and a program development team consisting of Judy Kappenberg and Laurie Libarios, drafted a proposal that was eventually approved by the Board of Regents in the spring of 2005. From the outset, the team intended that the program follow a career ladder concept and access existing, successful program feeders into the pipeline of teaching recruits. This 2+2+2 model hopes to attract high school students participating in the Running Start or Jump Start Programs, who come to the campus having earned college credits in general education and education courses.  The Teacher Academy Programs currently established in high schools will also provide needed recruits whose co-curricular experiences may qualify them for advanced standing in the AAT degree program. The AAT Degree Program is accessible to students statewide with the idea that a neighbor island student could complete the general education requirements of the AAT degree on a neighbor island community college campus or via distance education. To establish and run the AAT Program, the development team requested a program coordinator, three full-time instructors, a media specialist, a counselor, and a clerk to oversee the recruitment of targeted under-represented groups and to provide support for students pursuing this career path. In the fall of 2005, Leeward Community College secured the funding needed from the state legislature to officially begin the AAT program. 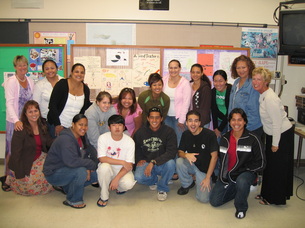 In spring 2006, a program coordinator (Laurie Lawrence) and one full-time instructor (Bobbie Martel) were hired to begin implementing the AAT Program and to create and teach the first educational courses. In fall 2006, the AAT Program officially began with 21 AAT Majors. Bobbie Martel (current AAT Program coordinator) noted that during the program’s first semester, those first students became her “family” because she was their only instructor for all the education courses. Subsequently, the program counselor, media specialist, clerk, and two additional instructors were hired during the first year, and with the hiring of one more instructor the following year, the AAT Program was fully staffed by fall 2007. Two years later, in spring 2009, the AAT Program was officially accepted by the Board of Regents as a permanent program. and the first articulation agreements were signed with University of Hawai`i at Manoa and the University of Hawai`i at West Oahu.

Since its inception, with the efforts and hard work from the current Leeward administration and the entire Leeward faculty and staff, the AAT Program has grown exponentially: from 21 to nearly 400 AAT Majors; from 2 faculty members to 9 faculty and staff and 6 student peer mentors; from a small, but cozy office to a new building; and from $10,000 in annual funding to $2.64 million in private and federal grants. However, despite this enormous growth, the Education Program retains the feel of family, where every student counts and is supported. 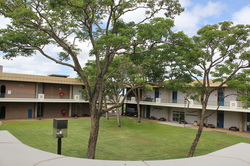 The Education Program is housed under the Social Science Division at Leeward Community College. Leeward Community College opened its doors in the fall of 1968 as the first college in the University of Hawai`i system to be developed without a connection to a pre-existing technical school. The college’s guiding principle was “innovation” – a readiness to depart from tradition in order to bring the best of current educational practices to our students.

In 1968, Leonard T. Tuthill, the first Provost, welcomed over 1,640 students into humble old buildings that once housed Pearl City Kai Elementary School. That first semester witnessed more than twice the anticipated number of students ready to explore the “Community College” experience.  In the spring of 1969, the College moved to its current location, on forty-nine acres near the geographic center of O`ahu between Pearl City and Waipahu.  Since those beginnings in inauspicious temporary facilities, enrollment in credit classes has grown to place the College among the largest community colleges in the State with approximately 8,000 students enrolled each semester.[1]

The main campus is located between Pearl City and Waipahu on the island of O`ahu. Situated on approximately 49 acres of mildly sloping land, the upper main campus provides a commanding view of Pearl Harbor. While the Leeward coast and Central O`ahu are the primary areas served by the College, students attend Leeward Community College from all parts of the island and State.  The College is comprised of a diverse student, faculty and staff population.  Leeward CC has an average of close to 8,000 students, representing diverse nationalities and cultures. The 2010 enrollment report showed the largest student ethnicity is Hawaiian/Part Hawaiian 26%, Filipino 21.5%, Mixed Ethnicity 12.5%, Caucasian 11%, Other Asian 10%, Japanese 8%, Pacific Islander 3%, Chinese 2%, and All Others 6%.  Faculty members hold degrees in their disciplines from more than 25 states and 15 foreign countries. They are experts in their field and have real world experience which links content with practice.